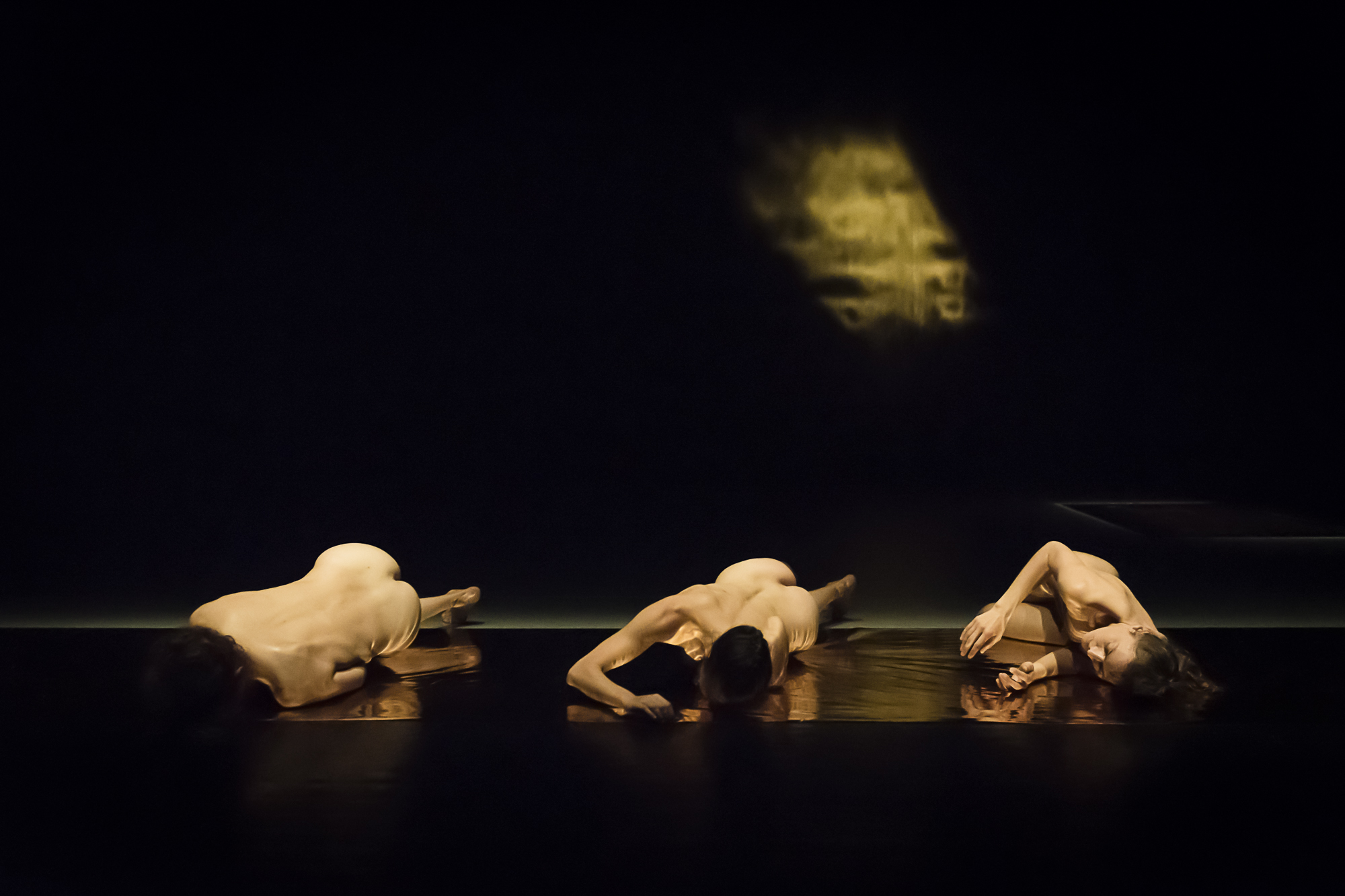 „For nothing is more heavenly

Than to resist and to yield;
To yield and to resist.”
(Virginia Woolf)

You can work on time like on a mine: measure its thickness, embellish its tunnels, suffer the collapses, landslides and catastrophes. And yet to tear the crystal of an instant away from the mystery of its slow motion: the sparkling incidence (or accident) of an order, a symmetry, a synchrony, always miraculous. The relationship between time and destiny has always been a geometrical conjecture. A technically adventurous conjecture – and the exercise of a delusional calculation – as the race to the phantasmagoric deposits of wealth had exacerbated the fever of the last century’s gold diggers, so little concretely golden in the outcomes, so abstractly aural in the proceedings.

Time digging is the magical conjecture of a nugget of order, a molecular miracle of alignment between the molar organisation, the unimaginable pressure of a dark time, without edges or chronology. Time digging means making the body the extension of this dark matter, which incubates, as a promise of light, its potential for order. Gold is the material metaphor of the unthinkable biocompatibility of a time that does not resemble a history, in which the individual is not his or her body but rather a magmatic state of permanent indeterminacy. Time with neither head nor tail; body with neither head nor matter.

The World of Infinite Shifts stages this relationship of conflictual filiation, which is in reality one of emanation or exhalation, between Chronos and Aion: on the one hand, the discrete time of history – the open eyes of action; on the other, an indiscrete time without history – the closed eyes of the performance. Chronos knows only of elaborations; Aion knows only of transformations, slips, permutations. Chronos belongs to the historians. To Aion belong the prophets: Tomorrow in Present Tense.

Similarly, in Chronos all metamorphoses are movement; in Aion there is no movement that is not metamorphosis: time, palindromic by definition (ANNNA es también un palindromo), palindromic morphology is also the most complete, the most succinct of verbal metamorphoses: reversed on itself by inversion or retroversion – the word goes on an adventure, the vicissitude of its return to itself. And if palindromes are to the language what gold is to the world of means – an exception – and if the imaginary has, like that, invested them with seductions which are magical when not diabolical, it is because it could not imagine an entirely palindromic language, to the same extent that the rule of symmetry governing mineral constructs does not apply to life; it is because, in short, language owes itself the feat of being asymmetric and conveying an asymmetric logic. Morphological symmetries are a matter of childish language and poetic composition; logical symmetries are a thing of oneiric and instinctual thinking. It is almost inevitable that the dancing body becomes, to the extent that it is home to the battle of Chronos and Aion, the theatre of this further negotiation between the asymmetries of the first and the symmetries of the second – it is almost inevitable that the dancing body exposes, with a kind of paradoxical, oneiric coherence, the possible revocation of the asymmetries of time and language: the possible synchrony of the body with all its states.

Because Chronos is the abstract tension of time, but Aion is its material extension (Matter of Ages – Ages of Matter), its flesh and the flesh of its flesh, and the abyss summoned by its abyss: its disorientedly amniotic, its uninterrupted plasticity. In this slipping space, gestation has replaced any gesture. And since Chronos‘ secret is the condemnation of the locality, Aion’s universe of infinite shifts will in turn be the expression of the invincible nostalgia of a time without history, when we were nowhere: we were the place, and the place was its movimiento, and the movimiento was entirely palindromic. And since the locality is in turn the thetic mystery of enunciation, the destiny of signification, the non-place that we are in Aion works by semiosis: all its signs are held on the other side of signification. All its bodies want to get lost in the matter.

Inversion and retroversion – going back on the word. When not prophetic, the palindrome is structurally profane: in its beginning, all its end is written. At the same time, its supersymmetry does not exist except in the mysterious and somewhat vain motion, the complication of its sign. The palindrome is acephalous: like certain Romanesque basilicas, which replaced a second apse on the facade, and in which the movement could ideally be fantasised as a peri-ambulation, a slip from itself to itself, without beginning or end. Headless is the body that sways its liquid identity here from any asymmetry, there from any concretion or chunk that can polarise its meaning, stiffen its logic, direct its meaning.

For this reason, perhaps, dissident surrealism insinuated that a world in search of a headless body was a world irresistibly devoted to tragedy: visited by the palindrome, a labyrinthine mystery of symmetry. Because palindrome, lethally symmetrical, is the true anthropological scheme of tragedy, created to make sense of an unacceptable condemnation to death due to the simple fact of being born; and to acquire, in the unrepeatable innocence of birth, the greater guilt and the greater promise of punishment. Tragedy only exists to give a reason for the illusion of asymmetrical vicissitude, the adventure of differentiation that is the history of each one, faced with the deadly symmetry of the mystery of birth and death.

Life is a Triadisches Ballett. Triadic motion, to the extent that all the morphological adventures of the triads (from Christianity to idealism) have existed only to admit the hope of a movement, of a historicising difference, a signifying language, a circulation in the tragedy of desperately symmetrical constructions: to re-articulate the retro-articulated palindrome of the body as matter, and matter as body; to tighten in a turn of a waltz, a vicissitude, an argument, the blind system of opposition of the classical dualisms and the inveterate Manichaeisms. To introduce the obliqueness, the deviation, the hope of a figuration in the destiny of the body, seized by the palindromic equation of being and nothing, of life and death, of organicity and minerality. And since the figure is the dismantling of the oppositional logic – of the absolute asymmetry which is also the most tragic symmetry; since the figure is, between the yes and the no, between the physical world and the metaphysical world, between life and death, the tertium that it seizes without denying, which it asserts without affirming, it was almost inevitable that the imagination of the West sought the metaphor in the mysterious movement of a triad of female bodies: from the Graces, Parcae, Norns of iconography, to the virtues of theology, to the arts of epistemology.

It was natural that the same body to which the tragic imaginary had fundamentally delivered the material and palindromic mysterion of birth and dying, tripled itself to dance the revocation, the suspension, the extension of that mysterion: the Graces were always and only the triadic stroboscopy of a strange movement that wanted „dancing“ to deny the sufficiency of being and non-being; or that wanted to dance precisely to attribute dance with the faculty of retaining the body here with the unique meaning to which death condemns it, in a kind of always elusive obliqueness, of dilated imbalance. On the secretly feminine character of this strange dancing paradigm, all seasonality and precession, which the figure imposes on the dual beat of organic life and the theological one, there is Dante’s verse „Three women around me came…“. Dancing is the logic that, to the „processional“ system of incarnation, wholly governed by the historical law of identity, resemblance, equation, opposes the „precessional“ system of metamorphosis, entirely governed by the mythic law of figuration, of dissimilarity, of difference. Interchange, infinite shift.

Dressed in this mysterious triadity, Going back becomes a motion, a sea dance. Perhaps the only verb capable of restoring its complexity is the French déferler, which describes not so much the breaking of the waves on an obstacle, but rather the miraculous kinetic complication for which the cresting wave returns, coiling in on itself, with foaming interference. The foam is in a sense the mysterious product of friction between the round forces of circulation that spread the melody of the wave motion, and the orthogonal universe, the angular resistance of the material universe that forces that motion. And since the froth is the liminality, the fervent contradiction of a movement that no mathematical model can reproduce – the palindromic gesticulation of water – it was natural that it was precisely the foam itself that contemporary science referred to in the search for correlative mythopoeics. Quantum foam is the subatomic turbulence, the pure vibrational and multidimensional power from which emerge, like Venus – as an illusion – the chronic time we know, the metric space we experience. In this turbulence, and only in her, the temporal laws of the phenomenal world are not yet valid. In this turbulence, Aion governs what happens. And the body becomes an imperfect dihedral: its dualism has intervened in every moment from the malice of the spiral. A pattern of spiralling dualism is also inscribed in the twist that, exactly at the centre of the word ANNNA, „turns“, gesturing it, dancing it, its palindrome: ANNNA.

At all times, it is precisely to the figurality of the body that ANNNA will delegate a similar chance to unfold or roll up new dimensions for the given dimensions of the body, to introduce new spirals, new anamorphoses in the „pact between surfaces“ of which the phenomenal space is made: none of its bodies will stay or move on traceable planes. It will always recall certain strange nudes by Yngres, as Roberto Calasso describes them: restless like flesh that is screwed together to become another surface, paradoxical, surplus, refractory to any geometric or perspective synthesis. Thus, when in accordance with this same rule of torsion, the three interpreters of ANNNA crawl from one side of the scene to the other, as if they were climbing on an oblique surface mysteriously engraved on the phenomenal floor of the stage, the chronic paradox of the show appears in all its purity: walking at the beginning of life is performed with all the complication, all the tantric tortuosity of those who have lived many lives.

Thus, three bodies in ANNNA recall at all times, like breakers, the foaming of carnal time in the metallic place, orthogonal, made up of longitudes, stripes, borders and angles, of the scenic space. Incapable of being stationary, all their seasonality is exposed at all times. The very idea of identity emerges, from The World of Infinite Shifts, as a seasonality of the flesh, marked by a thousand breakers, a thousand inversions, a thousand points pli (or folding points) and „points of catastrophe“.

Likewise, the music in ANNNA works through slipping and fluctuating states of matter: from the residue of a possible solid state (the cadential discretion of the „beat“), to the circulation (of the blood), to a mysterious, almost endocrine secretion.

ANNNA’s economy of movement thus plays between fractional micro-movements (the small quantum catastrophes that lift the foam) and the long waves of its déferlement, of its rounding from one cliff to another of the material spectrum: from the mimicry of the dark (in which the body is the only residual sparkle), to the mimicry of gold (in which the body is the only residual shadow): the long wave of its tractions between opposing and symmetrical abstractions. If one could describe it with a metaphor, the draperies of certain headless statues would come to mind, where the body is only a conjecture of the thousand turbulences and metamorphoses of the matter that surrounds it and which, hiding it, reveals it.

Next
Everything is related but it’s boundless…